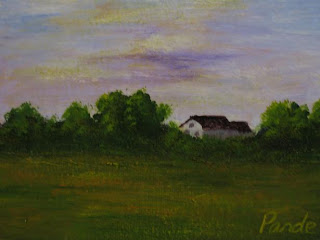 Few scenes could be simpler than the farmland of the North American midwest. Even though I grew up in an urban environment, spending over two decades in Ontario and Michigan allowed me to appreciate the endless possibilities offered by the farm scene for a landscape painter.
Dusk emphasizes that quintessential element of the American farm, the treeline often planted or retained as a windbreak, which can be set off either against the background or the foreground to create interest. The paint is laid on rather thinly in this painting allowing the canvas texture to show through. Dry brushed highlights (to which the camera does not do justice) can be seen in both the sky and the field. These are just enough to suggest a low and distant sun, perhaps even just below the horizon. The overall mood of the painting definitely evokes a sense that the day is done.
Dusk, Acrylic on canvas board, 5"X7" $40 (unframed)
Posted by Atul Pande at 4:25 PM 1 comment: 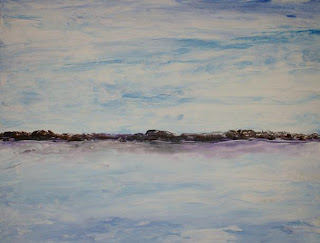 Painting with a knife lends itself to the creation of texture that adds to the sense of depth in a painting. The thicker the paint, the richer the texture. The short open time of acrylic paint limits how long the paint can be moved around on the canvas. This requires the artist to work quickly.

For Distant Coastline, I covered the canvas with a thin layer of acrylic gesso and let it dry. Then I used a painting knife to roughly spread thick gobs of white gesso all over the canvas starting from the top. The sky and the water were painted starting from the top and the bottom, respectively, using ultramarine blue closest to the top and bottom. Cerulean blue was used closer to the horizon. With more gesso on the painting knife I spread a thin layer from the top towards the horizon. I repreated the same process from the bottom up. By varying the pressure of the knife, I was able to create the color-mixing and textures that I wanted.

By now there was enough pain on the canvas to slow down the drying giving me enough time to work the coastline. The coastline was built up with layers of dioxazine purple, burnt umber and ivory black. Very thin lines of paint along the knife edge were worked into the creamy layers of gesso. Once the outline of the coast was set, more paint was added to create depth. Finally, with a thin bead of white gesso on the knife, I cleaned out the bottom edge of the coast. This also allowed some of the land colors to be drawn into the water creating reflections. 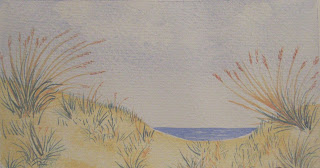 Watercolor is probably not the easiest medium for self-taught artists. From figuring out the choice of paper weight to the amount of water to use were aspects of using watercolor paints that I learned through experimentation. Having started with acrylics first, it was easy to assume some of the same attributes would carry over. The task proved much trickier as I came to realize what every half-decent watercolorist knows! Watercolor paint can only be worked over so much before the freshness of the color is lost leading to drab, muddy pictures.

Sand Dunes was one of my early attempts in watercolor and one that reinforced some key learnings: (1) Use the fewest colors possible, (2) exploit the whiteness of the paper to achieve highlights, and (3) be bold with the brushstrokes. The last may be the least obvious but not less important than the other points. Slow, tentative brushstrokes inevitably are the prelude to overworked areas that spoil the painting.

I also like Sand Dunes because it was done with just two colors: yellow ochre and ultramarine blue. Simple palette, simple painting.

Posted by Atul Pande at 7:54 PM No comments: 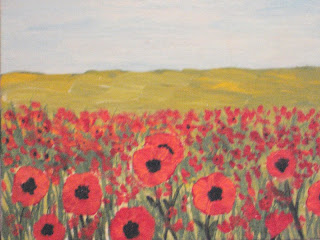 Recently I read a blog post by a professional artist in which she asked the question "Can anyone be an artist?". Without going into detail, I gathered that according to this blogger only some individuals who possess attributes such as aspecial drive to create and originality of expression can be artists. I have no argument with the notion of "specialness" that makes one an artist. The more important question to me (being neither a trained nor professional artist) seems to be "Can only artists create art?". I am sure any of you who read this will have your own views. Personally, I believe art is not the exclusive preserve of "artists". External perspectives, such as those of the audience, have a role in defining what is art. Hence, even the creation of a non-artist could be perceived as art is if the audience says so! This is the sort of external validation that separates, for example, graffiti that is unwanted from that agreed by many to be a form of atistic expression.

Philosophy aside, sometimes painting is just for fun and not a response to some inner angst that must drive creativity. Red Flowers is one such fun painting. It took only a few minutes to do. Perhaps to some it will appear trivial or reminiscent of grade school 'art'. But this little painting makes me smile every time I look at it. Tell me what you think. 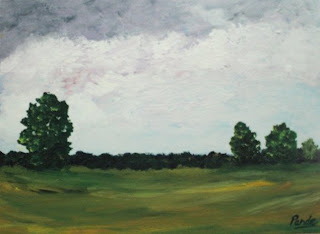 Since taking up landscape painting a few years ago, I am always looking for sources of inspiration. My interest in photography many years ago taught me a bit about composition. Of course, painting gives even greater flexibility since it is possible to "re-arrange" objects in the scene unlike in photography. Yet what I find is that often the same scene evokes many different interpretations of light, space, form and perspective.

Sunny Fields reminds me of an American midwest scene, such as you might drive by on the freeway without paying attention. Even the greatest hurry is insufficient sometimes to allow one to ignore certain scenes that have just the right combination of elements -- perhaps even something as trivial as an angled sliver of light hitting the grass or the treetops in a way that makes an ordinary setting memorable. The painter is at liberty to interpret such moments in a way that perhaps a photographer might not. 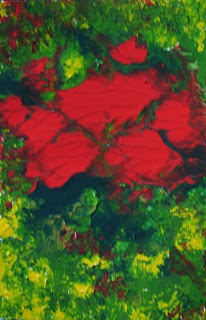 As a novice artist, I have been tempted to view the materials as being incredibly important to the artistic output. After much frustration and the inevitable education that comes from "just doing it", I have come to realize that materials have their limits. The most expensive brush, paint or background cannot make up for what the artist must bring to the process.

Summer Flowers was inspired by my use of a clear glass kitchen cutting board as my palette. I keep it on top of a white work table so it serves as a perfect surface to lay out or mix paints. Afterwards, I just let the paint dry then spray it with water and scrape off with a knife. After I have used a number of colors on the glass, sometimes I can see interesting patterns. So for Summer Flowers, I laid out an arrangement of heavy-body acrylic paints (yellow ochre, cadmium yellow medium and sap green) then sprayed generously with water. As the colors began to run together, I took a bunched-up paper towel and dabbed a few clear spots on the palette. I dropped in fluid cadmium red into these spots. Then I took a block of Arches 140lb watercolor paper and put it on top of the palette with just the pressure of my hand. I held it there for about a minute to let the paints grab on to the paper. When the block came off, there were not only interesting patterns but also organic textures suggesting leaves and flowers. For the few places that the paint did not reach, I rolled up a small plastic bag and dabbed in and out of the paint to cover up the glaring white paper.

Posted by Atul Pande at 3:48 PM No comments:

Color and form in landscape 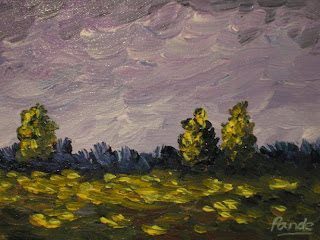 For the self-taught novice landscape artist like me, the wealth of color and form in a scene can be quite overwhelming. In the beginning, I was strongly tempted to depict every aspect of the picture, paint every leaf on a tree, or accurately note each blade of grass! Now I constantly remind myself to focus on the key elements, simplify the composition and say the fewest possible things in the finished picture. Only by doing so can I hope to fully convey the impact of the scene that inspired the painting. Playing with abstract compositions has helped loosen my style to where I am no longer as scared of the first brushstroke. Now I can abstract the essence of a scene to build the painting.

Love of the landscape 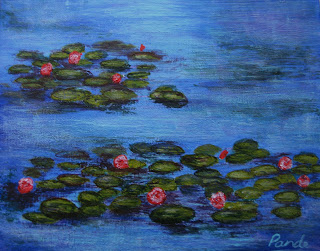 Recent interest in the abstract aside, my first attempts with painting in acrylics were landscapes and I continue to be fascinated by them. The possibility to depict the natural environment with a few brushstrokes on a two-dimensional plane is at once challenging and exhilarating. The same vista viewed many times over leads to endless opportunities for a different interpretation. Of course, this is what leads to an unlimited source of inspiration for landscape artists -- witness Monet's prolific output during his years at Giverny.

Water Lillies, Acrylic on canvas board, 5"X7" (Not for sale) 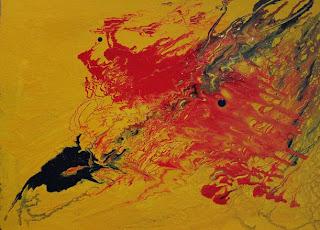 The ice has been broken! After my first acrylic abstract, I discovered the true freedom that comes from relinquishing control to the medium. Fluid acrylics and a few simple techniques can produce wonders that no amount of slaving over a canvas will. For this piece in particular, I was worried about being able to create enough movement and excitement with just three colors. As it turned out, the acrylics moved in fascinating ways that was a pleasure to watch. I hope you enjoy it too. 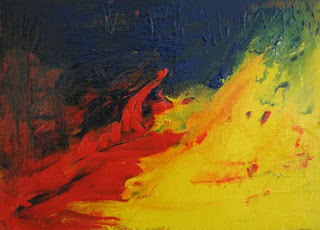 After a few years of gingerly exploring acrylics in various styles (realistic, impressionistic, you name it), this week I created my first abstract. The beauty of acrylics is you have the chance to start over again when a painting goes real wrong. I was working on a knife painted impasto version of an urban landscape that became muddy and dull. After putting it away for a few weeks, I pulled it out and was impressed by the textures and decided to use the paper for an abstract makeover. Here is the result.