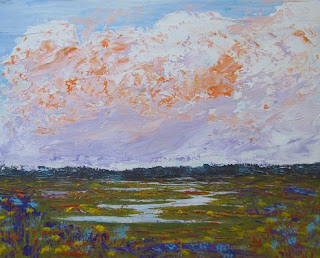 Putting artificial constraints on the painting conditions can have a simplifying effect on the composition and technique. Three Trees was completed with a limited palette and limited brushstrokes.

For Marshland, I set a time limit of about 20 minutes from picking up the brush to the finished painting. To be honest, I did spend many days rehearsing the painting in my mind. I deliberately chose a colorful palette so as to not to waste time picking the perfect color.

The time limit led to minimal working of the paint. This in turn produced freshness of color that would be easily lost by excessively re-working the paint.

Waves
I read recently about a technique called 'tonking' (named after an art professor, Henry Tonks) which has traditionally been used in oil portraiture to smooth out the underpainting and remove the brushmarks. The basic tonking technique involves laying an absorbent piece of paper (newsprint, paper towel, etc.) over the wet painting, pressing down lightly and lifting up.
I tried a variation of tonking on the two small abstracts, Light and Waves, which I am not sure are entirely finished but I decided to post them anyway. For Light, I applied layers of black and blue thick color with a knife and allowed it to dry. The texture from this first layer allowed the next layer to be spread with uncontrollable variations. While the paint was still wet, I placed a folded sheet of newspaper on top of the canvas, pressed down evenly with my hands and lifted the paper off. Unlike tonking for portraiture, I was aiming to create texture -- and I got it!
For Waves, I squeezed paint (white, light and brilliant blue) directly on to the canvas and spread it with a knife until I got a wavy effect. I then placed a piece of plastic wrap on the wet paint, pressed it with my hands and lifted it off. The texture that appeared looks like tree branches hanging over a seascape.
I may work over these pieces to add some highlights but thought the use of tonking on abstracts might be of interest. Tell me what you think.
Light, Acrylic on canvas board, 5" X 7", Not for sale
Waves, Acrylic on canvas board, 5" X 7", Not for sale
Posted by Atul Pande at 5:14 PM 4 comments: 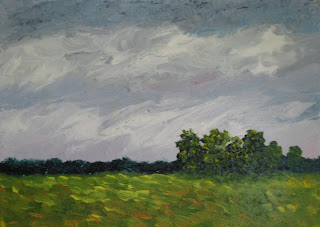 Sometimes I find that trying out variations of the same theme in different pieces can break the monotony of doing the same painting over and over again until you get it right. Those of you who visit this blog will know that farmland fascinates me and I have often posted paintings inspired by this theme.

Hayfield is a small piece that was done some time ago, but really just finished recently by adding highlights to the foreground. Pieces like this have taught me that aspects of the same scene can be re-arranged in numerous ways to compose a painting. The discipline that comes from doing such a "series" of paintings has helped me overcome the beginner's notion that I must have novel inspiration for each piece! 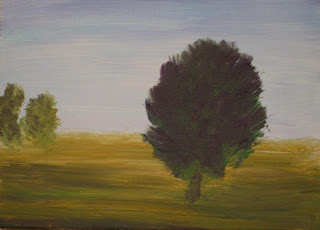 Since I can only paint when I am not busy with my full-time 'day job', several days often go by without my touching a brush. Even when there is a long gap I still keep thinking about composition and technique, working them over in my mind for when I do get to my studio. Upon picking up a brush I often feel driven to quickly complete a piece. Nothing helps this more than having a simple composition and a limited palette.

Three Trees is a small piece done with just four colors (dioxazine purple, light blue permanent, chromium green and yellow ochre, plus white gesso) and one filbert brush. While doing this painting, I roughly counted the brush strokes and I am pretty sure that there were less than 50. Next time I will be aiming for less because it sems to lead to cleaner color.

Afternoon on the Prairie 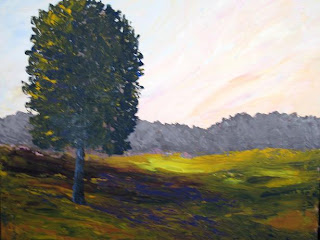 This is a rather fast knife painting, an approach perfectly suited to acrylic paint. The colors were mixed directly on the board and moved around only as much as needed to the shapes and light-dark contrasts. Even the colors in the tree (ultramarine blue and cadmium yellow medium) were moved just so as to create the shape. The fact that this minimal working of the paint still produced a mostly green hue reinforces the wisdom about how overworked paint can lead to mud!

As I said in another post, scenes such as this one are commonplace in the midwest and their beauty probably wholly unnoticed by most people. To me the play of atmospheric effects on farmland along with the change of vegetation with seasons is enough to inspire forever.