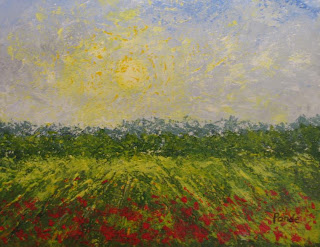 Poppyfield at High Noon is another knife painting in the same series as Sunrise. The technique here was similar to that I used for Sunrise with one exception. Most of the painting was done in one session but the highlights in the sky and the red of the poppies were added after the first layer had completely dried. Inevitably, once the thickly applied paint had dried the next layer could only be applied to the bumps and ridges of the previous layer. This shows well in the rather random appearance of the highlights in the sky.
Upon stepping back from this painting I liked the effect -- and left it alone. I guess while the artist attempts to control the medium and technique, the medium can sometimes control the art.
Poppyfield at High Noon, Acrylic on 300lb watercolor paper, 11"x14", $75 (unframed)
Posted by Atul Pande at 8:14 AM