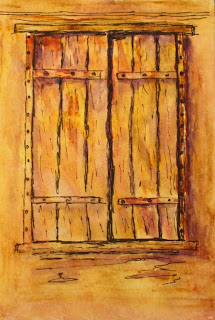 Combining media in art is nothing new, nor particularly notable in itself. Ultimately, as Randall Tipton has pointed out, what artists do aims to produce a good painting rather than worry about rules. Indeed, if artists followed rules there would be no progress in art.

Rough-Hewn Barn Window is just another ordinary window, perhaps on a hay barn, consisting of rough-hewn planks nailed together, less a piece of marvelous carpentry than an example of ultimate American pragmatism. Therein though lies the character of the workmanship, however elementary, done by a human hand.

This piece is done with ink and watercolor which lend it both definite form and some texture. Prolonged study might even suggest directionality to the light falling upon this window that, even in the most fantastic of imagination, could only conceal the basics elements of farm life.